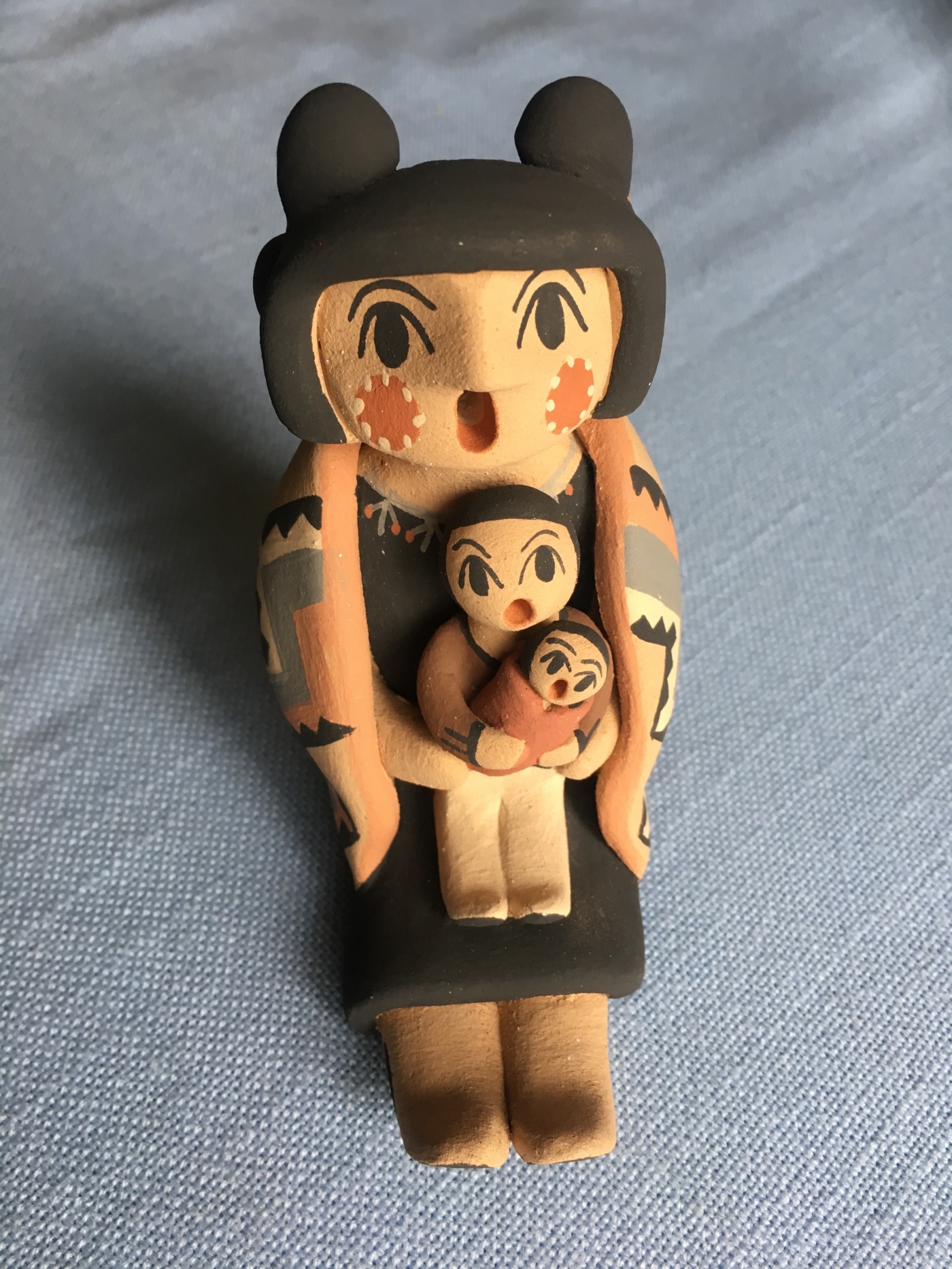 I spent part of National Storytelling Week (January 26 – February 2) immersed in the art of storytelling—radio storytelling. After a week-long Transom workshop in New Mexico, I produced, narrated, and edited my own radio segment that aired on Santa Fe’s KSFR on February 21, 2019. The piece features Santa Fe’s former City Historian Ana Pacheco, who is quite the storyteller herself. Take a listen:

When I applied for the Transom Traveling Workshop, I had no idea it overlapped with National Storytelling Week. I just liked the idea of spending that tough week between January and February in Santa Fe. Mom’s birthday would’ve taken place that week. Her 80th birthday. What better way to move through a painful anniversary then by working towards what will hopefully be a new chapter?

It was one of the Santa Fe storeowners who mentioned Storytelling Week as she introduced us to the Pueblo storyteller figurines in the Plaza store windows. My guess is these little sculptures are always on display regardless of the calendar. These clay figures are a relatively recent tradition revived by Cochiti Pueblo potter Helen Cordero, who made her first storyteller figure in 1964 at the request of designer Alexander Girard. To quote the book FOLKLORISTICS: AN INTRODUCTION,

“Helen pondered his request. ‘I kept seeing my grandfather [Santiago Quintana]. That one, he was a really good storyteller and there were always lots of us grandchildrens around him.’ He had wanted his traditions preserved and maintained, and went to great lengths to assure that anthropologists got it right.”

Since it is Women’s History Month, here’s a bit more about the Pueblo artist Helen Cordero:

I only just learned about the legendary Alexander Girard on this trip to Santa Fe. My cousin’s wife introduced me to his work when we decided to dine at The Compound, the Santa Fe restaurant Girard designed in 1966. So it seemed a cool coincidence that he played a role in the recent history of these Pueblo storytellers I love so much. Girard designed several restaurants including New York’s legendary La Fonda Del Sol (menu via SFMOMA) and L’Etoile, yet The Compound is his only restaurant that still operates. In a town with centuries of history, it was a nice change to feel a little slice of mid-century heaven. It was the kind of place profiled in a 1960s Sunset Magazine, which always makes me feel closer to my mom.

And I guess that’s the thing for me these days–finding ways to feel closer to my mom since her passing. Collecting and sharing women’s stories always makes me feel deeply connected to her, which is what I needed on what would’ve been her 80th birthday. I’m forever grateful to historian Ana Pacheco for letting this radio student interview her on a very chilly Santa Fe morning. Also, I’m in awe of the skills and patience the Transom Traveling Workshop team displayed during our week at KSFR! Before leaving New Mexico, I bought my own clay storyteller as a reminder of my incredible storytelling experience in Santa Fe. I chose this grandmother-mother-daughter because, like Helen Cordero, I feel inspired by the generations before me to share the stories and traditions of my home in Southern California.

One thought on “Santa Fe Stories During National Storytelling Week”